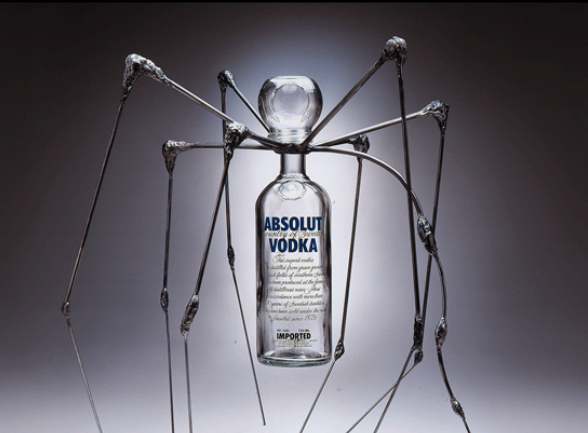 The Absolut Art Collection at Spritmuseum contains more than 850 works of art from about 550 artists, created during the period 1985-2004. It is a colorful, multilingual, in-the-know – and at times, naïve – collection. Internationally famous and renowned artists sit side by side with lesser known, local names. The collection spans across isms and themes in the art world – and through all of its spheres. Here you will find paintings, graphic art, photography, furniture, fashion and handicrafts. All works have been used for global advertising campaigns for Absolut Vodka.

What unites the works of art in the Absolut Art Collection is that every image or object portrays the iconic Absolut Vodka bottle. The pieces were created as part of a strategy to build and communicate a brand during an era associated with New York’s Studio 54 and glitter balls, the first victims of the AIDS epidemic, the fall of the Berlin wall and the birth of IT. All the collection’s gems, oddities, elegant objects, haute-couture trends, mysteries, emotions and political comments create a nuanced portrait of three decades’ worth of cultural trends and developments.

There are several important ideas to explore in the collection: a group of street artists from New York in the 80’s, a handful of Russian artists using absurd comedy to protest against corruption and censorship at the fall of the Soviet Union. A collection of artwork from African American artists. A selection of piece from Young British Artists, making their way towards the international scene. Each and every one of these groups and individual artists offer an opportunity for reflection, and to focus on art born out of a place, a time, a situation, with its own unique expressions and esthetics.

The first piece of art created for Absolut Vodka was Andy Warhol’s Absolut Warhol, 1986. There are a few stories of how the iconic artist was given the commission. One version is that Warhol himself

suggested the idea to the American Absolut Vodka importer at a dinner party: ”I love the bottle. I want to do something with it”. The importer could see the possibilities of combining the Absolut brand with exciting, contemporary art, and Warhol later recommended other artists for Absolut collaborations, such as Keith Haring and Kenny Scharf.

In the late 1990’s and early 2000’s, Absolut Vodka initiated a more directional, long-term approach in Europe. This was when some of the most eye-catching and well known pieces were added to the Absolut Art Collection, from artists like Damien Hirst, Tom Ford and Louise Bourgeois, as well as influential Swedish artists such as Ola Billgren, Dan Wolgers and Linn Fernström.

Advertising and art have coexisted for a century. What Absolut Art Collection shows is that they can be combined. That they can collaborate in a thought-provoking way. But also that the opposite is true. The collection has gone through a revitalization in later years, becoming relevant again and again, through global events and trends.

When the Swedish state sold Absolut Vodka and the remainders of Vin & Sprit AB to French Pernod Ricard in 2008, it was decided that the collection was of particular cultural and historical value to Sweden, and that it would be retained by the Swedish state. Today, the Museum of Spirits is its own foundation, but was originally established as a corporate museum for Vin & Sprit AB. It was deemed to be very fitting that this art collection would have its new home at the museum, in order to be shown to art enthusiasts and the general public.

Since moving to the only remaining Djurgården galley houses in 2012, the Museum of Spirits has shown and commented on the Absolut Art Collection through annual, individual and group exhibitions such as:

Face it – a selection from the collection
Rude Girls by Béatrice Cussol
Traingone by Frank Bowling
Powerful Babies – with artwork from Keith Haring and his successors
Egentligheter – Lena Andersson & Dan Wolgers
No Label – with works from the activist art movements of the 1990’s
Under ytan (Under the Surface) – Bertil Vallien
Absolut Art Collection – The Wilder Side
David Shrigley – Exhibition of giant inflatable swan-things
Absolut Art Collection – Photo
Angus Fairhurst
Staff’s Choice
Absolut Art Collection: The Party is Over
Right now: Fashion Cocktail

Follow our curator Mia Sundberg into the art archives.